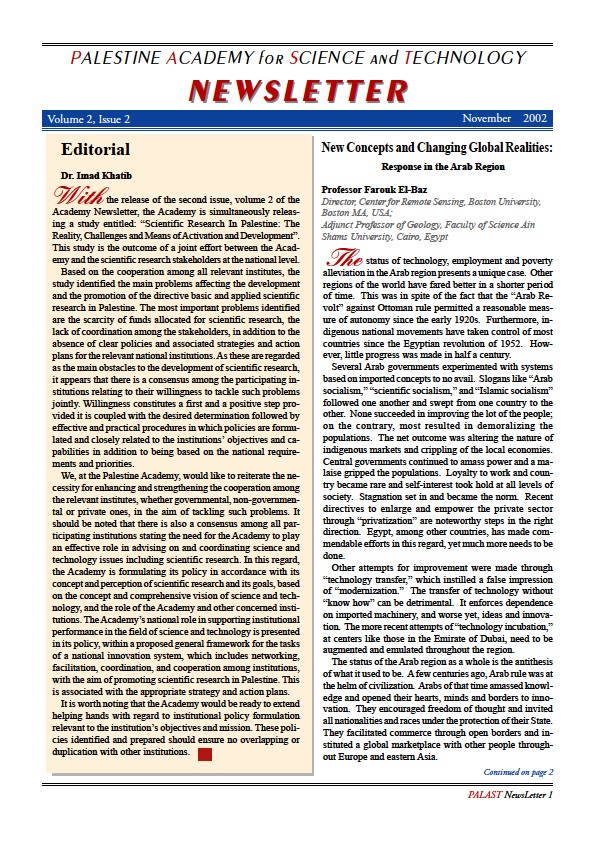 Editorial
Dr. Imad Khatib
the release of the second issue, volume 2 of the
Academy Newsletter, the Academy is simultaneously releasing
a study entitled: “Scientific Research In Palestine: The
Reality, Challenges and Means of Activation and Development”.
This study is the outcome of a joint effort between the Academy
and the scientific research stakeholders at the national level.
Based on the cooperation among all relevant institutes, the
study identified the main problems affecting the development
and the promotion of the directive basic and applied scientific
research in Palestine. The most important problems identified
are the scarcity of funds allocated for scientific research, the
lack of coordination among the stakeholders, in addition to the
absence of clear policies and associated strategies and action
plans for the relevant national institutions. As these are regarded
as the main obstacles to the development of scientific research,
it appears that there is a consensus among the participating institutions
relating to their willingness to tackle such problems
jointly. Willingness constitutes a first and a positive step provided
it is coupled with the desired determination followed by
effective and practical procedures in which policies are formulated
and closely related to the institutions’ objectives and capabilities
in addition to being based on the national requirements
and priorities.
We, at the Palestine Academy, would like to reiterate the necessity
for enhancing and strengthening the cooperation among
the relevant institutes, whether governmental, non-governmental
or private ones, in the aim of tackling such problems. It
should be noted that there is also a consensus among all participating
institutions stating the need for the Academy to play
an effective role in advising on and coordinating science and
technology issues including scientific research. In this regard,
the Academy is formulating its policy in accordance with its
concept and perception of scientific research and its goals, based
on the concept and comprehensive vision of science and technology,
and the role of the Academy and other concerned institutions.
The Academy’s national role in supporting institutional
performance in the field of science and technology is presented
in its policy, within a proposed general framework for the tasks
of a national innovation system, which includes networking,
facilitation, coordination, and cooperation among institutions,
with the aim of promoting scientific research in Palestine. This
is associated with the appropriate strategy and action plans.
It is worth noting that the Academy would be ready to extend
helping hands with regard to institutional policy formulation
relevant to the institution’s objectives and mission. These policies
identified and prepared should ensure no overlapping or
duplication with other institutions.