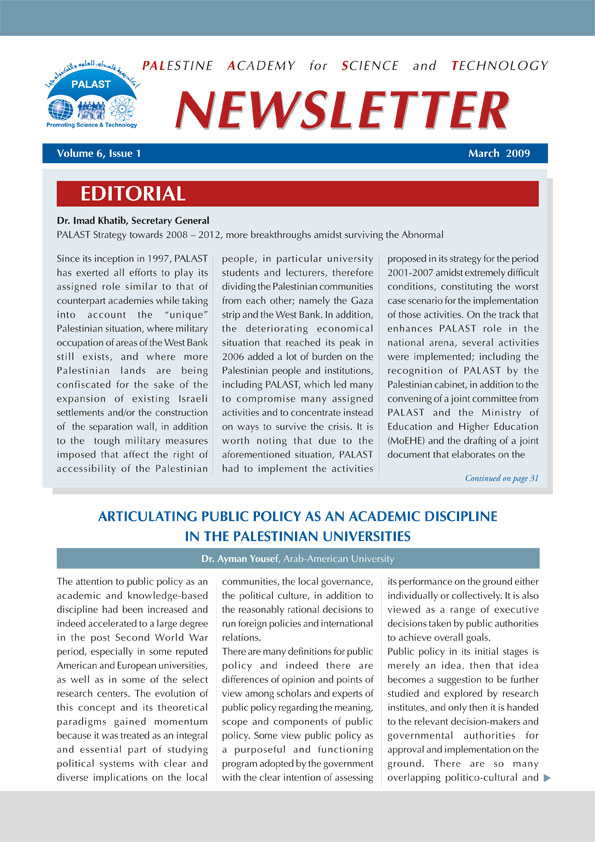 PALAST Strategy towards 2008 – 2012, more breakthroughs amidst surviving the Abnormal

Since its inception in 1997, PALAST has exerted all efforts to play its assigned role similar to that of counterpart academies while taking into account the “unique” Palestinian situation, where military occupation of areas of the West Bank still exists, and where more Palestinian lands are being confiscated for the sake of the expansion of existing Israeli settlements and/or the construction of the separation wall, in addition to the tough military measures imposed that affect the right of accessibility of the Palestinian people, in particular university students and lecturers, therefore dividing the Palestinian communities from each other; namely the Gaza strip and the West Bank. In addition, the deteriorating economical situation that reached its peak in 2006 added a lot of burden on the Palestinian people and institutions, including PALAST, which led many to compromise many assigned activities and to concentrate instead on ways to survive the crisis. It is worth noting that due to the aforementioned situation, PALAST had to implement the activities proposed in its strategy for the period 2001-2007 amidst extremely difficult conditions, constituting the worst case scenario for the implementation of those activities.