Scientific Research in Palestine: Reality, Challenges and Means of Activation and Development 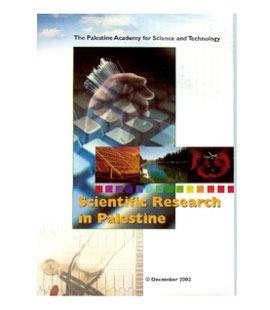 Scientific Research in Palestine: Reality, Challenges and Means of Activation and Development

Following its assessment of Scientific Research in Palestine, the Palestine Academy published a final report in December 2002. This publication is based on the results of focus group meetings, a preparatory workshop and a survey that were undertaken in 2001 in cooperation with the scientific research stakeholders at the national level and is funded by the British Consulate General.
The study identifies the obstacles and main problems affecting the development and the promotion of basic and applied scientific research in Palestine and makes recommendations. The main obstacles perceived are the political instability and the social and security conditions in the region, as a result of the occupation. The most important problems are the scarcity of funds allocated to scientific research; the lack of cooperation and coordination among the stakeholders; and the absence of clear policies and associated strategies and action plans for the relevant national institutions. Recommendations include that the Academy be an umbrella institution for all institutions engaging in scientific research through the institutionalization of cooperation and coordination and that the industrial sector release large funds for scientific research. In addition, the participating stakeholders raised the need for cooperation mechanisms, such as a national comprehensive database and the need for a Science Fund (SF) meant to finance scientific research according to national plans and to secure the sustainability of research. The study also stresses that national institutions should formulate policies and strategies to prevent duplication of activities and responsibilities. This national plan will help international and donor organizations to fund national priorities rather than politically driven projects.