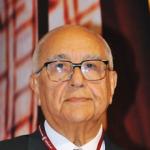 Dr. Abdel Salam Majali, President of the Islamic-World Academy of Sciences, started of as an ENT Consultant and Director General of the Royal Medical Services Jordan Armed Forces in 1960 to then consecutively become Minister of Health, President of the University of Jordan, Minister of Education, advisor to His Majesty, the late King of Jordan and Prime Minister (1993-1995 and 1997-1998). He has been a Professor of Medicine at the University of Jordan since 1973. From 1977-1982, he was Chairman of the University Council of the United Nations University in Tokyo and from 1985-1990, he was Member of the Executive Board of UNESCO. Dr. Majali established the Princess Muna College of Nursing for the Armed Forces, the Medical Training Center for medical and paramedical personnel and the Al-Hussein Medical City in Jordan. He launched a Health Insurance Project for the Civil Sector and set up numerous Colleges, such as Medicine, Nursing, Engineering, Education, Agriculture, Law, Pharmacy, Dentistry and Islamic Jurisprudence at the University of Jordan. He has also attended several UNESCO and WHO General Assemblies and was elected Vice-Chairman of both.