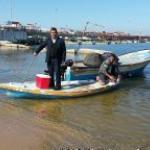 Results showed significant changes in water temperature and dissolved oxygen during the year, DO contents was severally reduce in the polluted area, Salinity levels were not significantly affected between waste water, sea water mixing zone and far away .Nitrate, sulfate, phosphate levels were high in waste water/ sea water  mixing zone than samples collected from far distance. Abundance of shell fish and sand crabs increased in waste water free zones. Dead jelly fish was intensively founded in the polluted zone. Heavy metals contents were higher in fish samples from coastal area than from deep area. Abundance of marine alga were higher in waste water sea water mixing zone than from others zone. In conclusion the study provides evidence of waste water influence of waste
Effects of waste water on the physio chemical and biological properties of sea water influence costal area and on population abundance of algae, shell fish and sand crabs.

Main outputs/results: The interesting outcome of the project is that generating very valuable information on the effects of water on the marine life and on the physicochemical properties of water, sediment and biotia. Additionally, for the first time heavily metal contents were determined in fish marine weeks and sediments. These data will be a base line for future cooperation

Expected future impact: We will investigated microbiological contamination of the sea shore, water, sediment and fish samples  resulted from wastewater discharge to the costal area. We will collect information regarding human health effects on the recreational area in the contaminated zone

Future Plan: We are applying for funding in this Al-Maqdisi Call for proposal

Main Impact: The project will generate information of microbial contamination of the sea shore that will be a base line for local municipalities and ministry of health to compare the health standards in the recreation zones, and to take initiative steps toward waste water treatment plants in Gaza Strip and elsewhere.

Sharing lectures: Master thesis emerged from this work. Thesis is available on line at: https://library.iugaza.edu.ps/book_details.aspx?edition_no=141450

Publication: Two manuscripts are under preparation

Sustainable cooperation after the visit with Palestinian researchers and/ or French researchers: We are still in touch with Prof Stephane via email.