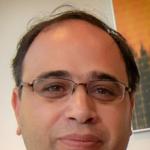 Dr. Abdallah Sayyed-Ahmad is currently an associate professor and chairman of the department of physics at Birzeit University. He joined the department of physics at Birzeit University in the Fall of 2010. Prior to arriving to Birzeit University, he was a postdoctoral fellow at the medical school at the University of Texas Health Science Center in Houston. He also was a postdoctoral associate at Department of Chemical Engineering and Materials Science at the University of Minnesota during 2006-2009. He started his scientific career as a PhD student with Peter J Ortoleva at Indiana University Bloomington during 2000-2005. He participated in a number of interdisciplinary research projects at the Center for Cell and Virus Theory at Indiana University and elsewhere. Dr. Sayyed-Ahmad's general research background and interests are in the broad area of mathematical and computational methods for biology, biochemistry and biophysics; the main objective of which is to model the physical and chemical processes underlying biomolecule, virus and cell behaviors. His specific research areas are: molecular dynamics simulations of protein, DNA, lipids, NSAIDS, bile acids and their complex as well as binding free energy calculations, electrostatic effects on macromolecules in electrolyte and intracellular crowded media, Poisson-Boltzmann equation, large-scale metabolic network modeling, microarray data analysis through transcription kinetic modeling and information theory, chemical kinetics, applications of information theory, regularization, linear and nonlinear optimization to calibration problems in biological sciences, large-scale/multilevel finite element solution of elliptic problems.